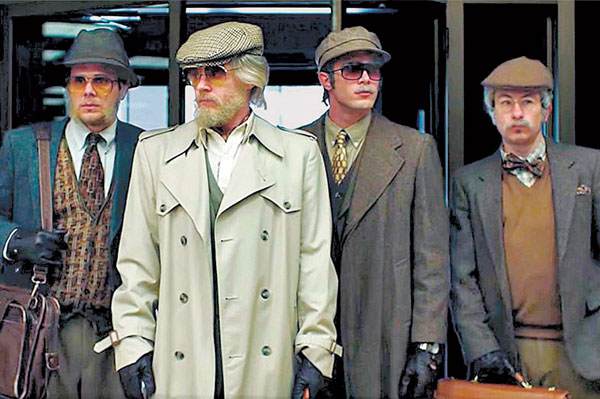 “American Animals”
2018 – Rated R
1 hr 56min
I ask you, who doesn’t love a good heist movie? Especially when it’s regular folks robbing a casino or a big bank. Over the years, several classics have been made in this genre including “Oceans Eleven,” “The Bank Job,” “The Sting,” and “The Italian Job.” They all make it fun to root for the little guys, hoping they’ll get away with it. The ultimate get rich scheme!
Well, if you watch “American Animals,” you’ll realize it isn’t quite in the same category. Simply put, it’s one weird movie. You know you’re in for something different as soon as the opening credits roll. We see the phrase “This is not based on a true story.” Then the words “not based on” fall away, letting you know it’s going to be an interesting yarn.
What makes it especially unique is the director Bart Layton chose to use actors to play the thieves, supplemented with footage of interviews with the actual participants and their parents. It makes for some very effective storytelling.
The story begins in 2004. We’re introduced to Spencer Reinhard (Barry Keoghan), a freshman art student at Kentucky’s Transylvania University. While touring the school’s library, he visits the Special Collection which includes, among other rarities, John James Audubon’s “Birds Of America,” which is valued at $12 million.
What caught his surprise was the fact that only a middle-aged librarian Betty Gooch (Ann Dowd), stood between him and the entire collection of rare books. He almost immediately started to concoct a plan to relieve the library of some of its more valuable contents.
When he mentions his outrageous idea to his friend Warren Lipka (Evan Peters), their wheels begin turning. Warren is a brash, excitable young man, attending the University of Kentucky on an athletic scholarship. They soon engage a couple other kids to be their accomplices. Eric Borsuk (Jared Abrahamson), an aspiring FBI agent becomes the brains of the operation. And super-jock Charles Allen II gets the nod for his money. They hold regular planning sessions, and due to the way it’s filmed, you feel you’re right in the room plotting with them.
Warning! Here comes a bit of a spoiler. If you want to be totally surprised, read no further and just watch the movie. However, by the fact that the director interviews the participants, you know they were eventually nabbed. Each one of them speaks from the heart about the robbery, how the plans came together, and reflecting on the way things transpired, the remorse they felt. It was obviously a life-transforming event for all of them. One noteworthy aspect of their testimonials was the fact that each one of them saw things slightly differently. You question what actually happened and who should you believe?
What makes the movie so entertaining was the method they devised for robbing the library. We see them donning some absolutely outrageous disguises. They apply fake moustaches and beards. Add some 1950s style hats. And put on classic London Fog trench coats, like old-fashioned Phillip Marlow detectives. You can’t help yourself from shaking your head in disbelief. Are these kids really that naive? Did they think they wouldn’t get caught? What a bunch of knuckleheads.
If you’re in the mood for something a bit different, and very entertaining, don’t miss “American Animals.” You’re very fortunate in that it’s offered on a bunch of streaming services
Currently streaming for free on Kanopy.com (with your library card) and Tubi. Also on Hulu, Plex, Pluto TV, and Prime Video.
3/5 Stars

About this column:
My main focus is on films that I feel have gone under the radar and deserve more recognition.
They include both mainstream and indie films streaming on services like Netflix, Hoopla, and Kanopy. I’ll also review noteworthy new theatrical releases as well.
For movie trailers, visit youtube.com.
If you have any suggestions, feel free to email me at: [email protected]. Also, if you’re looking for more recommendations, be sure to check out my blog: moviejunkiemark.blogspot.com.
Our Hometown DMCA Notices
Newspaper web site content management software and services